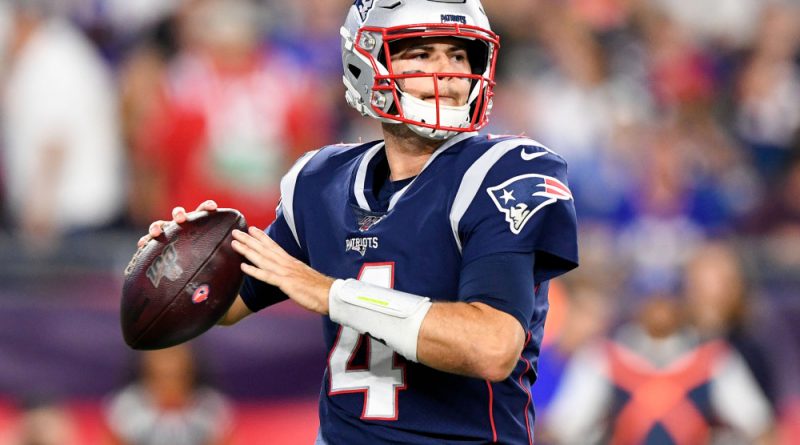 After 20 years of terrorizing AFC East from Foxboro Tom Brady has moved on to his next challenge. He leaves some big shoes to fill for whoever ends up taking over at the NFL powerhouse that is the New England Patriots. Jarrett Stidham will have a first crack at the position.

Last year the Patriots took a flyer on an Jarrett Stidham from Auburn. His job is by no means guaranteed. The Patriots will have a quarterback battle this off season (if this COVID-19 thing is resolved in time). However, it does seem like Stidham is showing progress in the right direction under tutelage of the greatest coach ever – Darth Bill.

Jarrett Stidham stands at 6’3″ and was born on August 8th 1996 in Corbin, KY. He went to school at Auburn University and was picked in ROUND 4 via PICK 133 by the New England Patriots. 2018 was not his most impressive year. As a matter of fact looking at Jarrett’s college stats you can notice regression from his initial success in 2015 with Baylor and his eventual drop in completion percentage from 68.8 to 60.7.

Some of this could be related to the conference switch. From 2015 in Big-12 to the SEC  in 2017 and 2018. I believe that there is ability with Jarrett, what we are missing right now is growth. If Bill can get Stid the Kid to grow mentally – the reign of terror New England has exacted on the NFL for 20 years may not be over.

Stidham spent the first year of his career mostly just watching Tom Brady. Learning from the GOAT as he went about his business. Granted, Tom was not a happy camper last year. Maybe he was not the best of examples. However, the word from behind the secretive doors of Foxboro is: Stid the Kid is doing alright.

Brian Hoyer, who knows the Patriots system well after having two previous stints with the team.

Cody Kessler, who is highly unlikely to be on the team when the season starts.

Potentially joined by one or two prospects from the 2020 draft. After all, Bill does not care when you were drafted, or if you were drafted at all. You will start if he feels like you give him the best chance to win football games.

For now, looking at the current QB group, Jarrett Stidham is new sheriff in town, and the job is his to lose…